The “RTK” in RTKLIB is an abbreviation for “Real-time Kinematics”, but RTKLIB is probably used at least as often for “PPK” or “Post-Processed Kinematics” as it is for real-time work.  In applications like precision agriculture, where the solution is part of a real-time feedback loop, RTK is obviously a requirement, but in many other applications there is no need for a real-time solution.  For example, drones are often used for collecting photographic or other sensor data but only need precision positions after the fact to process the data.  PPK is simpler than RTK because there is no need for a real-time data link between GPS receivers and so is often preferable if there is a choice.  The downside of course is that if there is something wrong with the collected data, you may not find out until it’s too late.

For the most part, RTKLIB solutions are identical regardless if they are run on real-time data (RTK) or run on previously collected data (PPK).  The most significant exception to this rule is what RTKLIB calls the “Filter Type”.  This is selected in the configuration and can be set to forward, backward, or combined.  Forward is the default and this is the only mode that can be used in real-time solutions.  In forward mode, the observation data is processed through the kalman filter in the forward direction, starting with the beginning of the data and continuing through to the end.  Backward mode is the opposite,  data is run through the filter starting with the end of the data and continuing to the beginning.  In Combined mode, the filter is run both ways and the two results are combined into a single solution.   This mode is set using the “Filter Type” box in the Options menu if using one of the GUI apps, or with the “pos1-solytpe” input parameter in the configuration file if using a CUI app.

There are two advantages to a combined solution over a forward solution.  First of all, it gives two chances to find a fix for each data point.  Let’s say there is an anomaly in the middle of the data set that causes the solution to switch from fix to float and not come back to fix for some period of time.   It may cause both the forward and backward solutions to lose fix but they will lose fix on opposite sides of the anomaly.  By combining the two solutions we are likely to get a fix for everywhere except right at the anomaly.  Another case where it often helps is in recovering the beginning of a data set.  Let’s say the first fix didn’t occur until five minutes into the data set.  With a forward solution, you would need to guarantee that nothing important happened during that five minutes, but with a combined solution, the backward pass will normally provide a fix all the way to the very beginning of the data set so there is no lost data.

The second advantage of the combined solution is that it provides an extra level of validation of the results.  To understand how this happens, it’s important to understand how RTKLIB combines the forward and reverse solutions.  For each solution position point there are three possibilities; both passes are float, one is float and one is fix, or both are fixed.  If both passes generate a float position, then the combined result will be a float with a value equal to the average of the two positions.  If one is float, and the other is fix, the float is thrown away and the fix is used.  In the case where both are fixed, then RTKLIB will attempt to validate the result by comparing the two values.  If they differ by less than four sigma, then the result will be a fix, otherwise it will be downgraded to a float.  Either way, the value will be the average of the two positions.  This degrading the solution type when the answers from opposite directions differ provides an increased confidence in the solution, at least for points for which we got two fixed values.

I will show a couple examples of the differences between forward and combined modes.  The first example is a more typical case and demonstrates how combined mode will normally give you a higher fix percentage while at the same time increasing confidence in the solution.

As you can see the forwards and backwards mode solutions are not bad but both have gaps of float in the middle as well as floats during the initial acquisition.  The combined solution though has almost 100% fix rate and in addition includes the additional confidence knowing that every point found the same solution when running the data in opposite directions.

This second example comes from a data set posted on the Emlid Reach forum with a question on why the combined solution was worse than the forward solution.  In the plots below, the top solution is forward, the middle is backward, and the bottom is combined.

This data was GPS and SBAS only, so had a fairly low number of satellites, also included a mix of poor observations and the solution was run with full tracking gain (i.e fix-and-hold with the default gain).  Both forward and backward runs found fixed (green) solutions and tracked them all the way through the data set.  However, at least one of them was most likely a false fix, causing the fix to be downgraded to float (yellow) for most of the combined solution as can be seen be seen in the bottom plot.

To confirm this, the plot below shows the difference between the forward and backward solutions.  As you can see, the two differ by a fairly substantial amount and it is not possible from this data to know which one is correct. 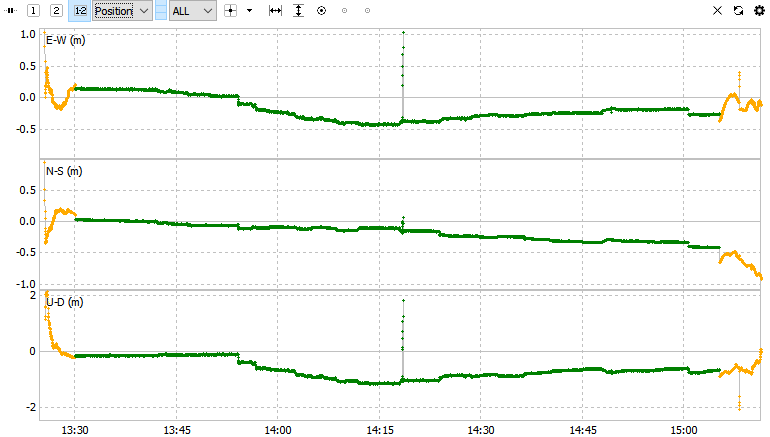 In this case, turning off fix-and-hold and running ambiguity resolution in continuous mode sheds some light on what may be going on.  The plots below are again forward, backward, and combined.  This time the forward solution loses fix early on and never recovers it, whereas the backwards solution maintains a fix through the whole data set and is probably correct since without fix-and-hold enabled, it is very unlikely to stay locked that long to an incorrect solution.  The backward solution is also consistent with the beginning of the forward solution, since the combined solution remains fixed in the early part of the data set where both forward and backward solutions are fixed.

Again, this can be confirmed by looking at the difference between the forward and backward solutions.  In this case they agree everywhere that both are fixed.

As this example demonstrates, if post-processing is an option, it often makes sense to run in combined mode with continuous ambiguity resolution instead of forward mode with fix-and-hold enabled.  The additional pass will increase the chances of getting a fixed solution without the risk of locking onto a false fix that fix-and-hold can cause.  Even if you find you can not disable fix-and-hold completely, it may allow you to reduce the tracking gain (pos2-varholdamb)

In this case, the results would have been slightly better if the filter were re-initialized but most of the time I find that allowing the filter to stay converged avoids a large gap in the backwards solution during the active part of the data set where the filter is reconverging. With fix-and-hold enabled I have found the chance of staying locked to an incorrect fix is too high and so it is better to reset the filter.  This is a recent change and hasn’t yet made it into the released version of demo5 but I should get it out soon.  The current version of the demo5 code (b28a) does not reset the filter for either case.

The other factor to consider when deciding whether to run the filter type in forward or combined mode is that combined mode will take nearly twice as long to run since it is processing each data point twice.  Most of the time this shouldn’t be an issue since it is not being run in real-time.

So to summarize, my recommendation would be to use combined mode if you do not need a real-time solution as the only real cost is a small amount of additional computation time and it will give you both higher fix percentages and more confidence in those fixes.

17 thoughts on “PPK vs RTK: A look at RTKLIB for post-processing solutions”