In my last post, I demonstrated some PPP solutions using real-time SSR corrections from the CLK93 data stream with various dual frequency receivers.  Results were quite good with errors after four hours generally below six centimeters in each axis.

To demonstrate this, I duplicated the previous experiment with a single frequency receiver, collecting twelve hours of raw observations with a u-blox M8T receiver along with the CLK93 real-time data stream for SSR corrections.   I processed the data with the same configuration settings as last time, except using “L1” instead of “L1+L2” for frequencies and ionospheric corrections set to  “broadcast” instead of “ionospheric-free” (dual-freq) corrections. 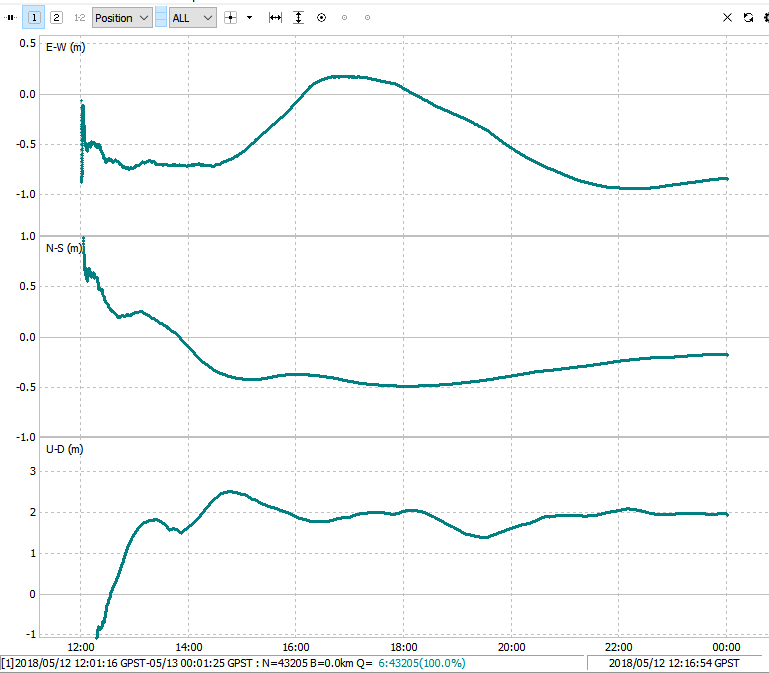 Presumably the single frequency PPP/SSR results will improve if RTKLIB is extended to support the RTCM SSR Phase 2 and Phase 3 ionospheric correction messages.

If you have been following recent announcements in precision GNSS, you may have been hearing a lot about SSR (State State Representation).  SwiftNav recently announced their Skylark corrections service, and u-blox announced a partnership with Sapcorda to provide correction service for their upcoming F9 receivers.  Both of these services are based on SSR corrections.

So, what is SSR?  Very briefly, it refers to the form of the corrections.  In traditional RTK with physical base stations or virtual reference stations (VRS), the corrections come in the form of observations in which all of the different error source are lumped together as part of the observation.  This is referred to as OSR (Observation Space Representation).  In SSR corrections, the different error source (satellite clocks,  satellite orbits, satellite signal biases, ionospheric delay, and tropospheric delay) are modeled and distributed separately.  There are many advantages to this form but what seems to be driving industry towards it now is that it allows the current VRS model where each user requires a unique data stream with observations tailored for their location to be replaced with a single universal stream that can be used by all observers.  This is a requirement if the technology is going to be adopted for the mass-market automotive industry for self-driving cars, since it is not practical to provide every car with it’s own data stream.

For more detailed information on SSR, Geo++ has a one page summary here and IGS has an 18 minute video presentation on the topic here.  Both are excellent.

Below is an image I borrowed from the IGS presentation which shows the flexibility of the SSR format.  It is intended to show how the same SSR data stream can be used globally for PPP quality corrections and also regionally for RTK quality corrections but it is also a good visual for understanding the message details I describe below. 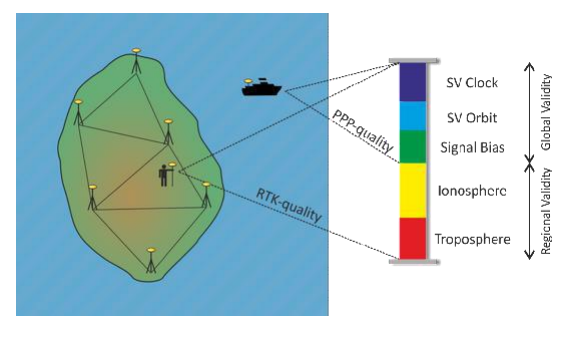 The RTCM standards committee is still in the process of finalizing the messages used to send the different correction components.  They have split the work into three phases.  Phase 1 includes the satellite clock, orbit, and code biases.  Phase 2 includes satellite phase biases and vertical ionosphere corrections, and phase 3 includes ionospheric slant corrections and tropospheric corrections.

There are several real-time SSR streams accessible for free today.  Unlike the paid services, they do not contain enough detailed regional atmospheric corrections to use as a replacement for a VRS base but they can easily be used for static PPP solutions.

I used the CLK93 stream from CNES for an experiment to test how well RTKLIB handled the SSR corrections.  It includes the Phase 1 and Phase 2 RTCM messages but not the Phase 3 messages.  Here is the format of the the messages in the CLK93 data stream:

You can register for free access to the CLK93 (and other) streams from any of these locations:

Unfortunately, RTKLIB currently only supports the Phase 1 RTCM messages and even this is not complete in the release version.  I have gone through the code and made a few changes to make the Phase 1 SSR functional and have checked those changes into the demo5 Github repository.  I also added some code to handle the mixed L2 and L2C observations from the ComNav and Tersus receivers.  After a little more testing I plan to release this code into the demo5 executables, hopefully in the next week or two.

RTKLIB is usually used to calculate PPP solutions without SSR corrections but this requires downloading multiple correction files for orbital errors, clock errors, and code bias errors and it is usually done with post-processing rather than real-time, after the corrections are available.  With SSR, the process is simpler because the solution can be done real-time and there is no need to download any additional files.  It does, however, require access to the internet to receive the real-time SSR data stream from an NTRIP caster.  The solution can be calculated real-time or the SSR corrections and receiver observation streams can be recorded and the solution post-processed.

To enable the use of SSR corrections in RTKLIB, you need to set the “Satellite Ephemeris/Clock (pos1-sateph) input parameter to either “Broadcast+SSR APC” or “Broadcast+SSR CoM”.  Note that CoM stands for Center of Mass and APC for Antenna Phase Center.  They refer to the reference point for the corrections.  The CLK93 corrections are based on antenna phase centers.

To generate my PPP solution I set the solution mode to “PPP-Static”,  ephemeris/clock (pos1-sateph) to “brdc+ssrapc”, ionosphere correction (pos1-ionopt) to “dual-freq”, and troposphere correction (pos1-tropopt) to “est-ztd”.  I also enabled most of the other PPP options including  earth tides,  satellite PCVs, receiver PCVs, phase windup, and eclipse rejection.

RTKLIB PPP solutions don’t support ambiguity resolution so the ambiguity resolution settings are ignored.  I specified the satellite antenna file as “ngs14.atx” which is the standard antenna correction file and is available as part of the demo5 executable package.  I also needed to include the CLK93 data stream as one of the inputs in addition to the receiver observations (and navigation file if post-processing).

I collected a couple hundred hours of observations with the SwiftNav receiver connected to a ComNav AT-330 antenna on my roof with moderately good sky visibility.  I then ran many four hour static solutions over randomly selected data windows.  I also collected a small amount of raw data from a ComNav K708 receiver and a Tersus BX306 receiver.

Here is a shorter data set from a Tersus BX306 receiver.  With the relatively small amount of Tersus and ComNav data I collected, I did not notice any differences in convergence rates or final accuracy between any of the three receivers.

The solutions generally all converged to less than 6 cm of error in each axis after 4 hours with one or two minor exceptions that seemed to involve small anomalies at the day boundary.  Since the RTKLIB PPP solutions don’t include ambiguity resolution they do take longer to converge but the eventual accuracy should be similar.

I’ve uploaded some of the raw observation data for the different receivers and the CLK93 data stream as well as the config file that I used for the solution here.

This seems like a good start and I hope that RTKLIB will support phase 2 and phase 3 corrections in the future.