In the last couple of posts I compared the u-blox M8T receiver and the Swift Piksi Multi receiver for a stationary rover and an external base station using the latest 1.2 firmware from Swift.  I did this for both RTK and PPP solutions.  In this post I will look at a moving rover case with a pair of Piksi receivers and a pair of M8T receivers.

In this experiment I did use matching receivers for the base data, so the RTKLIB solutions do include GLONASS ambiguity resolution and so should provide an advantage to the Swift internal solutions.  As I did last time, I will compare the real-time Swift RTK solution with post-processed RTKLIB solutions for the Piksi pair and the M8T pair.  In this case the M8T receivers are from CSG Shop and are running the 3.01 firmware so they include Galileo observations in addition to GPS, GLONASS, and SBAS.

In my previous moving rover experiments I shared a base antenna for the two base receivers but used separate antennas for the two rover receivers.  In this case I decided to also share the rover antenna between the two rover receivers to enable some more direct comparisons.  The base antenna is the same Swift GPS-500 antenna mounted on my roof that I used for the rover in the previous experiment.  The rovers are using a Tallysman TW7872 antenna mounted on top of a car.  In both cases I use a capacitively coupled splitter to isolate the two receivers and allow only one DC supply voltage to reach the antenna.  As usual, the data was collected while driving around my local neighborhood.

Whenever connecting two receivers to one antenna, or even locating to antennas close to each other there is always the concern that they may interfere with each other.  So, as a baseline, I first did a run with separate antennas for the rovers.  I used my inexpensive u-blox antenna for the M8T since it has a very long cable allowing me to separate both the receivers and the antennas by over a meter.  Here are the position solutions for the baseline test.  The Swift internal solution is on the left, the RTKLIB post-processed solution in the middle, and the M8T post-processed solution on the right.  As always, green is fixed points and yellow is float.

The post-processed solutions were both run forward-only and with continuous ambiguity resolution including GLONASS.  The percent fix for the three solutions were 69% for the Swift internal solution, 33% for the Swift RTKLIB solution, and 75% for the M8T RTKLIB solution.  I will use percent fix as a very coarse measure of goodness for now, later I will look at the solutions in more detail.  In this case I consider the Swift internal solution and the M8T RTKLIB solution roughly equal.  Both achieved 100% fix for a number of circles in a parking lot with open skies (22:30 to 22:35), and both struggled with partial fixes on the rest of the route which had more obstructed sky views driving along residential streets.  The Swift RTKLIB solution was noticeably worse and had 0% fix in the parking lot, and lower percent fix everywhere else.

Again I would consider the Swift internal and the M8T RTKLIB solutions roughly equal.  A different parking lot with open skies (1:43 to 1:48), gave no trouble to either solution, but both had only partial fix for the rest of the route.  In this case the Swift RTKLIB solution was noticeably better than the other two solutions which is interesting since last time it was noticeably worse.  This has been my experience in general with the Swift RTKLIB solutions, that they tend to be quite inconsistent.  With the previous firmware I traced some of the reason for this to unreported cycle slips.  I suspect the same is probably going on here but haven’t looked close enough to fully verify that.  As far as any interference occurring between the antennas, if it exists, it is too small to detect with this simple comparison.

Here are the raw observations for the two rovers for the second run, M8T on the left, Swift on the right.  Green lines are dual frequency, yellow are single frequency and red ticks are cycle slips.  There are 19 measurements available for the M8T solution and 22 for the Swift solution.  All are used for ambiguity resolution in the RTKLIB solutions but only the 11 GPS measurements are used for ambiguity resolution in the internal Swift solution.  The relatively cycle-slip-free region from 1:43 to 1:48 is from the parking lot where the sky views are open.

Since the exact same signal was fed into both receivers the observations can be compared more directly than in previous experiments.  Here is a zoom into the time in the parking lot and shortly after.   If you look carefully, you will notice that there are definitely more cycle slips reported in the M8T observations than in the Swift data.

The variability for the results from the Swift RTKLIB solutions are harder to explain and I don’t have any good answers for this yet.  I still do see cases of unreported cycle slips causing problems even with the new firmware and suspect this is a part of it.  I hope to investigate this further.

Another thing I wanted to look at is how good are the float solutions.  In Swift’s description of the new firmware they state that:

So, let’s take a look at the float portion of the internal Swift solution.  I loaded the .csv output file from the Swift internal solution into matlab, then plotted histograms for the horizontal and vertical accuracies for the fix and float solution points.  Here’s what it looks like: 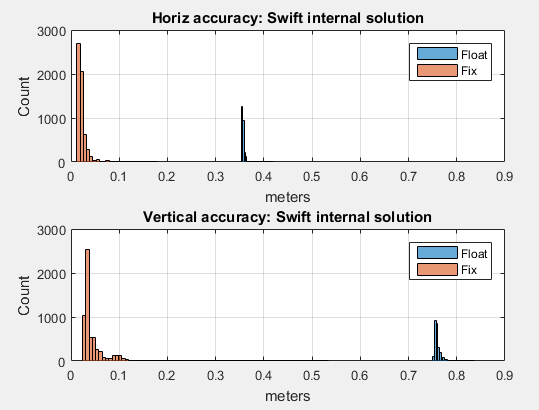 Notice that the float accuracies are significantly larger than the fix accuracies but they are probably realistic unlike the RTKLIB float accuracies which I demonstrated to be at least a factor of two overly optimistic in a recent post.

Here is an example of the solution points from the above data set in which the RTKLIB solution re-converges more quickly than the Swift internal solution.  This allows us to evaluate the accuracy of the Swift float values.  The top plot is one component of the horizontal position, and the bottom plot is the vertical position. Yellow is the Swift float solution, Olive green is the RTKLIB float solution and blue is the RTKLIB fix solution.  From the beginning of the data to 22:47:14 both solutions are float.  The RTKLIB solution converges to a fix at 22:47:14 and the Swift internal solution converges to a fix at 22:47:37.  Since both solutions eventually converge to the same value I will assume the RTKLIB fix solution is correct. 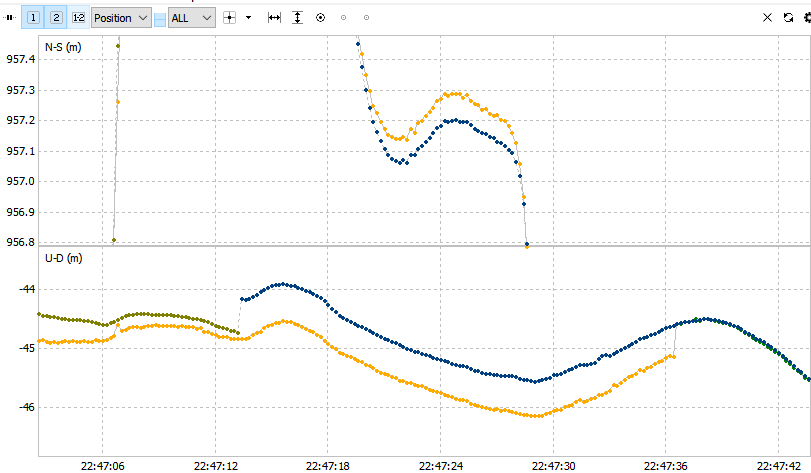 So what does all this mean?  I would summarize by saying that the results for a pair of Swift receivers with the new firmware are noticeably better than the results in my previous comparison and so are definitely a step in the right direction.  At least in my particular example, though, it still only puts them roughly on par with the results from a pair of M8T receivers.  They certainly seem to have the potential to be better than the M8T’s and hopefully with further improvements from Swift and maybe improvements in RTKLIB as well, we will see this soon.

I did not include a single M8T or Swift receiver paired with an external CORS or similar base station example in this moving rover comparison but would expect the Swift receiver to outperform the M8T receiver in that case because  of a better overlap in satellite pairs.  Also keep in mind that the Swift receiver does have some definite advantages in static and long baseline experiments as I showed in my previous two posts, especially the ability to get accurate locations for the base station using PPP solutions.

As always I want to emphasize that these are only one users results in one particular configuration and other users experiences in other environments could be quite different.  I have uploaded the raw data and RTKLIB config files to the sample data section on the rtkexplorer.com website if anybody would like to explore further.

I am just getting my newly borrowed NavCom receivers up and running and have upgraded my Tersus receiver with their new firmware so I hope to have results for these other low-cost dual frequency receivers soon.

15 thoughts on “New 1.2 Swift firmware with a moving rover”